There are a variety of different species of turtle that have different behaviors when it comes to sleep. Reptiles are sensitive creatures to changing environmental conditions such as the humidity falling, the air pressure dropping, and the water and air temperature decreasing.

However, people that don’t know or are new to owning a turtle might be wondering: Why is my turtle always sleeping? First off, let’s break down a few facts about the turtle’s sleep.

The short answer to this question is yes! Turtles do sleep and in fact, spend a lot of their time resting, too.

However, how much time a turtle spends sleeping will depend on their age, their species, as well as the water and air temperature in their environment. 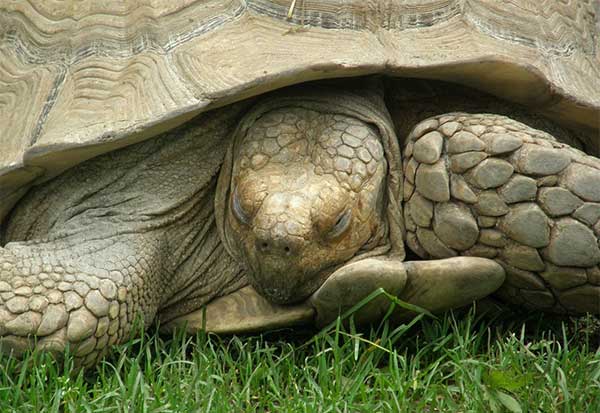 Where Do Turtles Sleep?

Depending on their environment and their species, turtles like to sleep in a wide range of places, particularly their basking spots, concealed areas, and under rocks.

Sea turtles, on the other hand, tend to sleep on the surface of the water, or under coral to stay out of view from predators as they rest.

How Long Do Turtles Sleep?

However, in captivity, the amount of time your turtle will sleep will depend on its environmental conditions. As a result, most species of the turtle will become diurnal, which means they sleep during the night and are active during the day.

This tends to occur as a result of indoor habitats often being stimulating, people being around their tanks often, and the fact that turtles are fed during the day when their owners are awake.

If your turtle is asleep every time you try to feed it, it could be a sign of another issue. However, it’s important to note that this is only a cause for concern if your turtle is younger and the environmental conditions aren’t at fault (i.e when winter is not approaching).

If the environmental conditions have changed in their tank, it is much more likely that they are starting the process of brumation.

Unlike hibernation, where a turtle won’t wake to survive the winter months, brumation is a similar process that occurs in captivity and just means that your turtle can remain active, but there is no guarantee that they will.

It is with noting that they will be significantly less active during their natural tendency to brumate, so you shouldn’t interfere with this process too much.

Why Is My Turtle Always Sleeping?

Although turtles spend a lot of their time resting and sleeping, it is important to determine why they’re always sleeping, as it could be a sign of an underlying health issue.

However, that being said, it isn’t abnormal for them to sleep, so don’t panic. But how do you establish whether much sleep is too much sleep?

Let’s break down a few aspects and potential reasons why your turtle is always sleeping.

If your turtle is sleeping a lot, it’s important to remember that your turtle’s sleep requirements will vary between species, as the sleep duration for every species of turtle is different.

For instance, sea turtles can sleep for up to 11 hours a day but need to surface in order to breathe. A resting or sleeping turtle can remain underwater for 4-7 hours before coming up to the surface.

Generally speaking, larger land turtles usually need more sleep than other species of turtle. This isn’t something to be alarmed about, as it is not abnormal for them to spend the majority of their time either resting or sleeping.

As we have already discussed, turtles are sensitive to their environmental conditions changing. In the wild, then, turtles establish when the season is beginning to change through the temperature of the water that they drink.

The temperature of the water dropping indicates to a turtle that winter is on its way, subsequently affecting their activity level as they prepare to begin hibernation.

In captivity, turtles will still use the water temperature to gauge the changing seasons, so if your turtle is sleeping more than usual you will need to make sure that you’re checking their water temperature regularly.

The easiest way to do this is to buy an accurate digital water thermometer. The fact that turtles are cold-blooded also means that their metabolism will speed up or down to fit their environment accordingly, which means that if your water temperature is too low, your turtle will eventually become a lot more inactive and will sleep for longer periods of time due to brumation.

That being said, it is good to keep an eye on your water temperature so that you’re not alarmed when your turtle inevitably goes into brumation. You should be regularly checking the temperature of your turtle’s water regardless of whether you have their water heater on in the summer.

However, your water temperature is likely to be too cold if you don’t have a water heater to regulate the temperature, so we recommend that you get your hands on one, especially for the colder months.

A water heater in your turtle’s tank is essential as it can help to keep your turtle healthy and prevent other health conditions from occurring, such as respiratory infections.

Generally speaking, the water temperature must be maintained between 75-86 degrees Fahrenheit or 23.8-30 degrees celsius. However, this is subject to change depending on the species of turtle that you have.

Keeping in line with the water temperature dropping, the air temperature is also bound to affect how much time a turtle spends sleeping.

In the wild, similarly to many other animals, some turtles live in seasonally cold climates and are required to hibernate throughout the winter to help them conserve energy, and survive the cold weather as well as the scarce amount of food available to them in winter.

Another aspect that will affect the duration that your turtle spends asleep is its age, as their age will also impact their activity level.

Young and juvenile turtles tend to have more energy and are thus more active, whereas older turtles begin to become less active as they age.

This makes it significantly easier to identify whether there appears to be an issue with your younger turtle, as they don’t tend to sleep or be as inactive as much as you would expect an older turtle to be.

If you’re concerned that your baby or young turtle is sleeping too much, then the safest thing to do is to consult with your veterinarian. Although it might be as simple as a temperature issue, it’s better to be safe than sorry when it comes to the health of your pet.

It goes without saying, but if you’re genuinely concerned about the amount of time your turtle spends sleeping, then the best thing to do is to consult your veterinarian.

They’ll be able to put your mind at ease and recommend the appropriate temperature their tank and water should be at, to ensure that they’re not brumating the entire time.

That being said, turtles spend a great deal of their time either resting or sleeping so you shouldn’t be alarmed that they’re sleeping a lot.

Always remember that no matter how much you try to keep your turtle active by altering the temperature in their tank and the temperature of their water, brumation is a completely normal process that you can’t avoid! After all, nature always finds a way.

So, next time you’re wondering why your turtle is always sleeping make sure that you go through this list and check off the potential reasons that could be responsible for their decreased activity in their tank.

The most likely reason that your turtle is sleeping too much is that the water temperature or air temperature is too cold for them, and as a result, they’ve gone into brumation.

Remember, your turtle can still be active during the brumation process so if you’re worried because they’re still active, but not as active as normal, this could be the reason why.

It is also essential that you remember turtles like to sleep and rest a lot of the time, so don’t panic too much. However, if when it comes down to it you can’t figure out why your turtle is sleeping, then contact a veterinarian at your own discretion.

They’ll be able to reassure you that you’re taking all the correct steps to keep your turtle as happy and as healthy as you can, and will be able to tell you of things to look out for when it comes to your turtle’s health.