In many cultures, different animals, omens, and symbols have great meanings. Some believe that symbols can show us messages, meanings, and signs of our lives, futures, and pasts. This is why symbols are so important across cultures and the world.

The turtle is a symbol that has many different interpretations in various countries and belief systems. The turtle can represent the wisdom of an old, sage creature, whilst also being a sign of good fortune and longevity.

If you have ever wondered what the symbol of a turtle means and why it is so special, then you are in the right place. 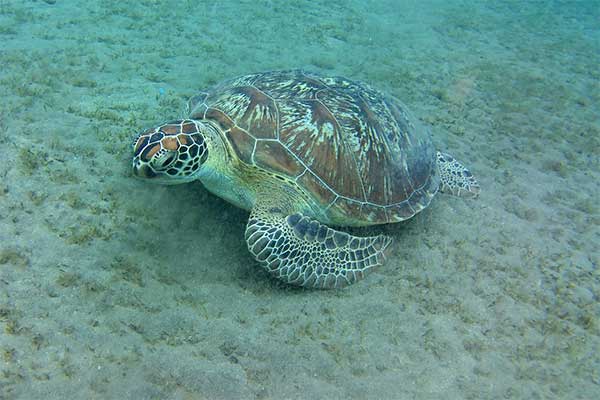 As a creature, the turtle is determined and serene. A turtle literally carries the world or its shell on its shoulders. Whilst being very slow-moving on earth, it can be incredibly agile and fast when in the water, conveying how it is not to be underestimated.

This can also symbolize how powerful they are in the right environment. In addition, turtles are very grounded, peaceful, and wise creatures, living for very long periods of time. This is why the symbol of a turtle represents a character of strength, understanding, wisdom, and patience.

One of the most famous tales about a turtle teaches us that ‘slow and steady wins the race’. Turtles are therefore renowned for their perseverance, and hard-working nature despite their obstacles.

A turtle within a dream can be both a good omen and a bad omen. Whether your turtle is a good or bad omen depends on how you perceive the turtle in the dream.

Turtles can be lonesome creatures, isolating themselves from the rest of the world, which could symbolize how you are feeling. Seeing a turtle in this way could also symbolize your shyness or reserved nature, feeling that you wish to retreat into your shell just like a turtle.

Turtles can live for astonishingly long times, and so dreaming of such a creature can be a sign of your own longevity, good health, and luck.

If you dream of a racing turtle, then maybe it is time that you slowed down and placed yourself a little!

Turtles have been present in many myths in the past. In an ancient Hindu myth, the tortoise Chukwa was known to support the world. The symbol of the turtle is meant to signify the creator of Earth and holder of the world.

This symbol is also replicated in the far East where the turtle’s shell is a symbol of heaven, and the underside of a turtle is the symbol of Earth. Therefore, the turtle has a deep spiritual meaning where its shape, size, and body united both heaven and earth together.

In the Christian Bible, turtles are known for their slow yet calculated movements, making them symbols of deep wisdom and patience, which are important virtues in the Christian belief system.

In a spiritual sense, the turtle is meant to act as a symbol that guides others, helping them to move forward, and cleansing the soul in the water.

In Native American tradition, a totem is a symbol between a tribe and its ancestors. In this culture, each person is associated or connected with different animals, which will act as their guides in life. These spirit guides will help you on your journey, and each has its own meanings and symbols.

In ancient Iroquois mythology, Native Americans believed that the turtle or the Great Turtle was the wisest creature of all. It is a symbol of Mother Earth and a sacred creature, with its outer, hard shell protecting life inside, just as Mother Earth protects all life.

If the turtle is your totem, then you are in tune with the ancient knowledge and wisdom of the earth. With a turtle totem, you will have an affinity with the land, animals, people, plants, and elements.

Although the turtle has a few different variations between Native American tribes, its meaning remains pretty much the same. The turtle represents Mother Earth for Native Americans, whilst its ancient, wise nature teaches people to walk their paths in peace.

The Meaning Of Turtle Symbol In Different Cultures

For the Aztecs, turtles were seen as a bad omen and symbolized cowardice. It was thought that their hard shells but soft interiors means that turtles were cowardly, only showing a boastful exterior, but no real strength within.

In Native American culture, the turtle is a totem of great wisdom.

In Polynesian culture, the turtle is a symbol of long life, and fertility.

As with many cultures, in Africa, the turtle is shown in fertility rites and therefore is an omen of life, fertility, motherhood, and feminine power.

In Japanese culture, the turtle has a wonderful symbolic meaning. The turtle is known as a signifier of good fortune, and long life. It is a positive omen that will bring people years and years of happiness and prosperity.

In Chinese culture, the turtle has powerful imagery. The turtle is known to carry the world on its back. This shows the turtle’s ability to have great patience, vitality, longevity, and fertility.

In addition, Chinese culture dictates that the turtle can foretell future events. This could be because turtles can sense an oncoming drought or bad weather, and will move to a safer environment before this happens.

Within Chinese culture, it was thought that the turtle is a model of the world. Its upper shell curves like the heavens above, and the lower part of the shell was flat as many Chinese people believed the world to be. They also believed that the future could be read on the turtle shell, as this animal is a wise, old creature.

This indestructible and long-lasting creature is known as a good omen, providing a symbol of longevity, strength and power.

What is the Turtle Symbol?

In conclusion, the turtle is a unique, wonderful creature that has a lot of meaning to it. Within many different belief systems and cultures, the turtle is an important omen of good health, luck, and prosperity. In most cases, the turtle is a symbol of great perseverance, patience, and longevity. The turtle is calculating, wise, and has great strength and endurance.

The turtle is known to carry the world on its shoulders, supporting and caring for it. It is a symbol of fertility, and female power and is indestructible.