When we think about turtles, we often imagine them retreating inside their shell as if it is a safe little home for them to hide in. This is not actually the case. A turtle shell does not act as a home for the turtle, as it is actually part of the turtle’s body, made up of bones, skin, and keratin. 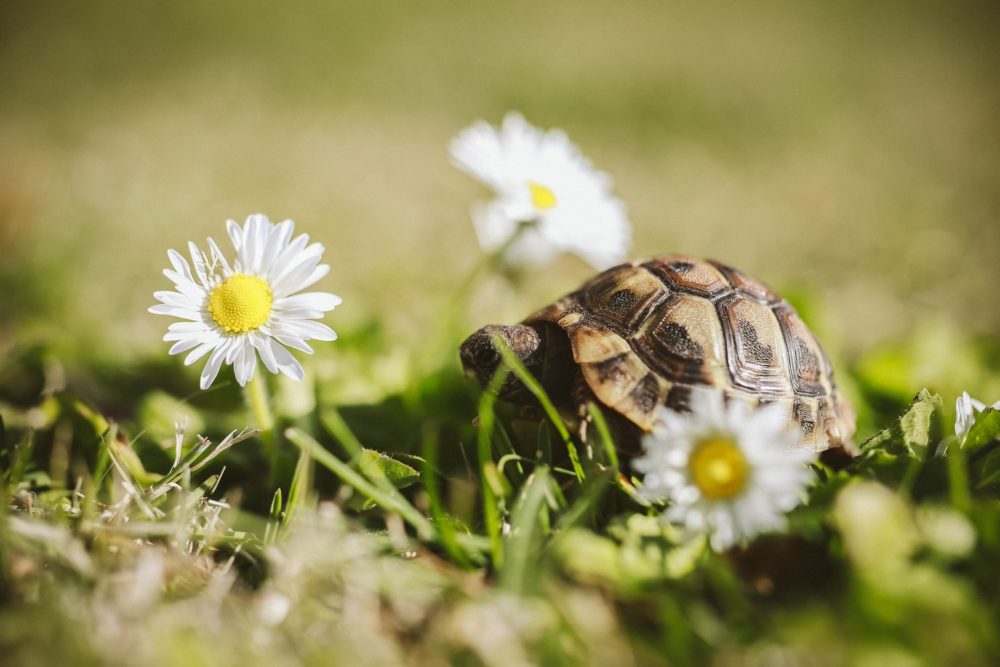 Turtles are fascinating creatures, with unique anatomical features and characteristics. You may be a fan of turtles, but have never thought about why they look the way that they do, or why they have a shell? We are here to help you understand more about these spe-shell animals, what their shells are, and what is inside a turtle shell.

What Is A Turtle Shell?

A turtle shell is essentially an extremely complicated shield for the turtle, protecting all of its vital organs and enclosing its body from harm. The turtle shell works as extra armor protecting the turtle inside. This is what makes the shell turtley awesome!

The turtle shell is actually an extension of the reptile’s rib cage, acting as a bony shell that keeps the interior of the turtle safe. The turtle shell has remained relatively unchanged after years and years of evolution and acts as the animal’s primary defense mechanism from all sorts of predators.

A turtle’s shell is made up of many small bones and is divided into two halves. The underneath part of the shell is known as the plastron, whereas the top part is called the carapace. The shell itself is made up of numerous little bones covered in plates of keratin called scutes.

Also read: Can Turtles Feel Touch on Their Shell?

The Anatomy of a Turtle Shell

The turtle shell works all at once as a barrier and is part of the turtle’s skeleton. The shell acts as the rib cage, spine, vertebrae, and sternum, and is made up of various parts.

You may be surprised to find that a turtle shell actually has three different parts. These parts are the bridge, the carapace, and the plastron.

This extra layer of scutes works to protect the bone part of the turtle shell from retaining damage. As land turtles and tortoises grow and age, the scutes grow along with it, and the turtle shell will have new rings and patterns.

On the other hand, turtles that are aquatic will actually shed their old scutes when they grow and change, making it seem as if the turtle shell is peeling.

The carapace is an easy part of a turtle’s anatomy to point out. This part is the dome of the shell on the turtle’s back.

It is the convex, curved part of the shell, made up of rib bones and dermal bones. This part of the turtle shell works as both the ribs and the backbone of the shell through the process of ossification.

On top of the bones found here is the skin, which is covered in scutes made of keratin. The scutes work to protect these bones from scrapes, bruises, and any damage.

These plates also go down the middle part of the shell in a sort of line formation towards the tail. Some turtles will have around 8 neural plates that go down the back of the shell.

Just at the end of the neural plates near the tail of the shell, you will find the suprapygal plates. There are typically two of these bones that sit at the tail. Next to this, there will be a pygal plate at the tail end, and every turtle will only have one!

On top of these bony plates of the shell, you will find the scutes. The majority of turtles will have around 13 main scutes and 24 smaller scutes on top of their shell. These scutes are actually visible on top of the shell and can often be used to identify turtles from one another.

The scute just behind the turtle’s head is called the nuchal scute, whereas, in the center of the shell, there are central scutes. Typically, there is only one single central scute on a turtle shell.

On each side of the vertebral, you will be able to locate the lateral scutes. In addition to this, there are much smaller scutes that are found along the edge of the carapace and go all the way around the shell.

Both the carapace and the scutes make up the top part of the turtle shell, whereas the plastron is the underside of the shell!

This part of the shell encompasses the epiplastron and the entoplastron. The epiplastron is located at the front part of the plastron. Each turtle will have two epiplastra, the left, and the right, and will be located likewise on each side of the turtle shell.

The entoplastron is just below and underneath the aforementioned epiplastra. This part of the shell borders both the epiplastra parts and the hyoplastron below it.

Then, you have the xiphiplastron underneath the hyoplastra, which is located towards the back part of the shell. There are two xiphiplastrons on the shell.

Finally, there is the bridge section that connects the underside of the shell (plastron) to the carapace.

Much like the topside of the turtle shell, the underneath side has scutes. However, there are not as many. Generally speaking, the plastron has 6 different types of scutes. This includes the gular scutes, which are a pair of scutes that are found just behind the turtle’s head.

Anatomy of A Turtle

The anatomy of a turtle is so unique and unlike that of any other animal on earth. Only in turtles and tortoises do we see such shells that are made up of so many bones and anatomical parts.

The turtle shell is so distinctive to this type of reptile that it offers many questions concerning its build, strength and capabilities, or even the question: what is inside a turtle shell?

What Is Inside A Turtle Shell?

The purpose of the turtle shell is to keep its internal and vital organs safe at all times. The shell acts as a barrier of protection for the turtle’s heart, lungs, and reproductive organs.

If you have ever wondered what is inside a turtle shell, then you are in luck. We have here all of the internal organs and parts of the turtle that are protected by its shell. These are:

Can a turtle live without its shell?

However, a turtle can survive with a heavily damaged shell, as the shell is a very powerful part of its body. The turtle shell can sustain a lot of damage, cracks, and shatters without impacting the turtle itself too much.

That being said, if you find a turtle or your own turtle has a heavily damaged shell, you should seek medical or professional attention for the turtle.

How hard is a turtle shell?

Because a turtle shell is made out of bones, it is actually very strong, hard, and durable. However, some turtle shells can feel quite soft to the touch, and these types of turtles are actually called softshell turtles.

Most turtles will have soft-feeling shells, but the shell itself remains very strong and powerful, capable of protecting the reptile completely.

The turtle shell will in effect act as a shock absorber for the body underneath, working as a layer or barrier from harm. That being said, it is not impossible for the turtle shell to become damaged, and predators can attack the shell, harming or even killing the turtle inside.

What does a turtle look like without its shell?

As turtles cannot live without their shells, a turtle without a shell would be a dead turtle.

What is a turtle shell called?

The only professional way it is referred to is by its separate parts; the carapace, plastron, and bridge. Other than that, it is always called the turtle shell.

What colors are turtle shells?

Turtle shells can come in a variety of different shapes and colors, and the answer depends on the type of turtle. The most common colors of turtle shells are tan, brown, black, and green.

However, this will depend on the specific species of the turtle as yellow-bellied sliders will have yellow-colored plastrons, whereas common turtles will have olive-green and brown turtle shells.

In addition, the red-bellied cooter has a more red-colored plastron, whereas map turtles have a more green tone to their shells with various markings.

All species of turtles and tortoises will have various different shells of varying shape, size, colors, and softness. However, all shells are there to protect the internal organs of the turtle and work as a protective barrier for the turtle, warding off predators that would harm or kill the turtle.

Not only this, turtle shells also work to protect the reptile from the elements and extreme weather conditions.

The turtle shell does not house the turtle but is actually made of the turtle, composed of bones, skin, and keratin that keeps the turtle safe. The shell is therefore a part of the turtle’s body and anatomy, capable of bleeding or retaining damage just as an animal’s limbs or bones would be.