You may be forgiven for thinking turtles have a very plain, some would say, “boring” diet. This is far from the truth! Their diets are as weird and wonderful as humans. With over 300 species of this unique reptile, each species’ diet is different.

What a turtle eats depends on many factors including its species, the kind of jaw it has for chewing, and its environment. Many turtles are carnivores while others are strict vegetarians.

The majority, however, are omnivores so they eat both meat and vegetation. Most species begin as meat-eaters whether they’re in the wild or in captivity.

As they age, their tastes change (as with most of us!) and they slowly move on to more plants and vegetables. You will find most turtles rely on insects, cooked meats, veggies, plants, and protein pellets.

It’s easy to summarise the whole turtle family like this to start with but they are far more complex than many of us think. So, keep reading to find out what do wild and pet turtles eat. 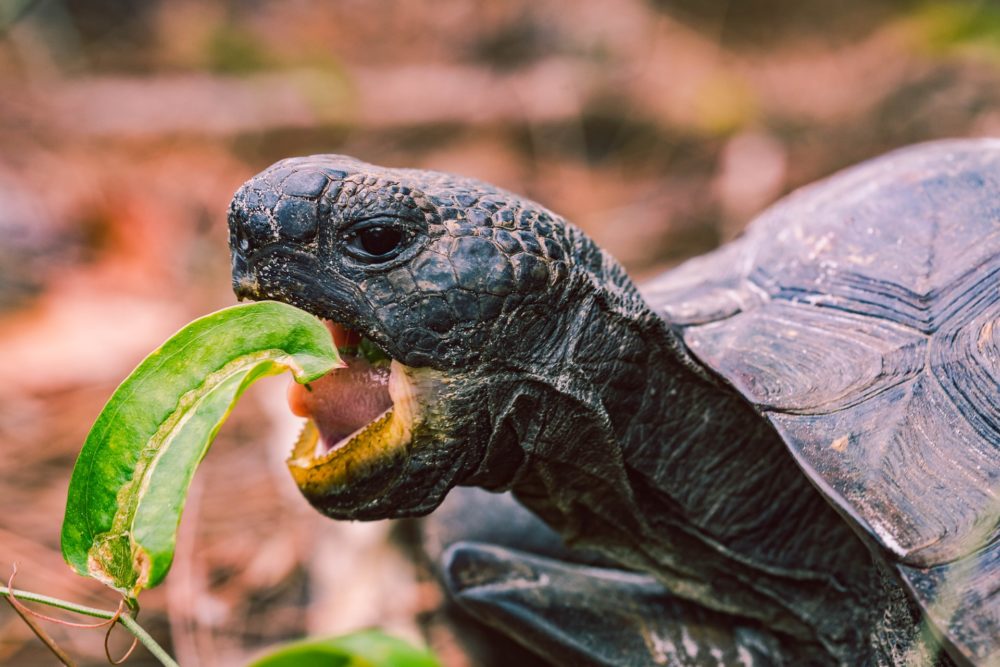 A source of food will hugely impact a turtle’s diet. Sea turtles will obviously have a very different diet to terrestrial turtles. Depending on its specific species, a sea turtle will generally eat algae, sponges, shrimps, squid, jellyfish, crab, seagrasses, sea cucumbers, or cuttlefish.

Large turtles such as the Leatherback sea turtle will eat mostly jellyfish to help them grow to gigantic weights of 1,100 lbs. That’s a lot of jellyfish! They use their scissor-like jaws to eat these easily while Green Sea turtles will just eat algae and seagrass.

Freshwater turtles have a very varied diet munching down on worms, snails, insects, water plants, insect larvae, and more. Snapping turtles, a species of freshwater turtle, are known to eat larger mammals like frogs, fish, and even smaller, unlucky turtles.

Terrestrial turtles eat an array of different foods such as worms, beetles, snails, grubs, and caterpillars. As omnivores, they also have a taste for fruits, different grasses, mushrooms, and to many a gardener’s annoyance, flowers. Aquatic and land turtles have been known to eat rotting flesh too.

It is interesting to note that most turtles follow a strict carnivorous diet when they are very young. As they grow older, they move onto plants to fulfill their appetites but, when in their natural environment, most omnivore turtles will eat worms, crickets, small fish, and various bugs as these are easier to come by.

Their surrounding area and environment usually choose a wild turtle’s diet for them. Depending on their geography and climate, some species will have a harder time coming across delicious bugs for lunch.

As we touched upon, a turtle’s jaw is an important aspect when looking into what they eat. A Loggerhead turtle’s jaw is supremely strong and able to crush its prey easily.

Therefore, this species relies heavily on crustaceans like crabs or crayfish. Green Sea turtle’s jaws are not as strong so rely on seagrass and vegetation in and around the water.

One environment you may find turtles dwelling in is ponds. Many turtles are found near ponds because of the rich source of food available there. Most ponds offer land and water plants as well as a seemingly endless supply of insects.

These amounts change drastically with the seasons though. Most ponds also have a lot of worms nearby for food. Some turtles even prey upon birds which are common visitors to pond areas.

Helmeted turtles sometimes hunt together to catch birds and then share the feast together. Some have been known to try and take down ducks too.

What do Pet Turtles Eat?

Chances are, you may know someone who has had a pet turtle at some point. Although they are wild animals, turtles can be wonderful pets with their own unique personalities.

Although pet turtles are more used to a life of luxury and daytime TV, their diets are just as diverse as their wild counterparts.

Pet turtles like to eat commercial turtle pellets and fish pellets to supplement their diet. They also like to eat earthworms and small fish which are usually sold in pet stores specifically for pet turtles.

Just like many wild turtles, homed turtles like insects that have nutrient-rich diets. These help keep the turtle full and healthy as well as tasty. It is recommended that turtle owners seek advice from professional veterinarians before planning a diet as captive turtles vary in species just like wild turtles.

One staple food is turtle pellets. These make up a good amount of a pet turtle’s diet. This is because these pellets are made to float on the water and not sink.

This makes it much easier for the turtle to open its mouth up and grab a bunch to feed on. These pellets are jam-packed with vital nutrients, vitamins, and protein to keep turtles healthy.

More carnivorous options include insects, earthworms, and feeder fish. These may be the menu’s specialty if you went to a turtle restaurant! It’s hard to remember that turtles are primitive animals and still have their primal instincts to hunt. Food such as these are wonderful sources of protein and are a delicious treat for most turtles.

Eating a gut-loaded worm may be the highlight of a turtle’s day! It is worth noting that these should be seen as treats for a turtle. Too much of this meat is not healthy so it should only be fed once in a while.

Apart from bugs and fish, fruit, vegetables, and plants make up a large amount of a pet turtle’s diet. If a turtle is very young, chances are, it prefers meatier options to feed on.

Older turtles are happy to try new foods such as diced-up apples, squash oranges, melons, berries, and carrots. These are some general choices but they can’t be given to every species.

It’s not just land plants that can be fed. Some aquatic plants like duckweed and seagrass are a staple of many turtle’s diets. 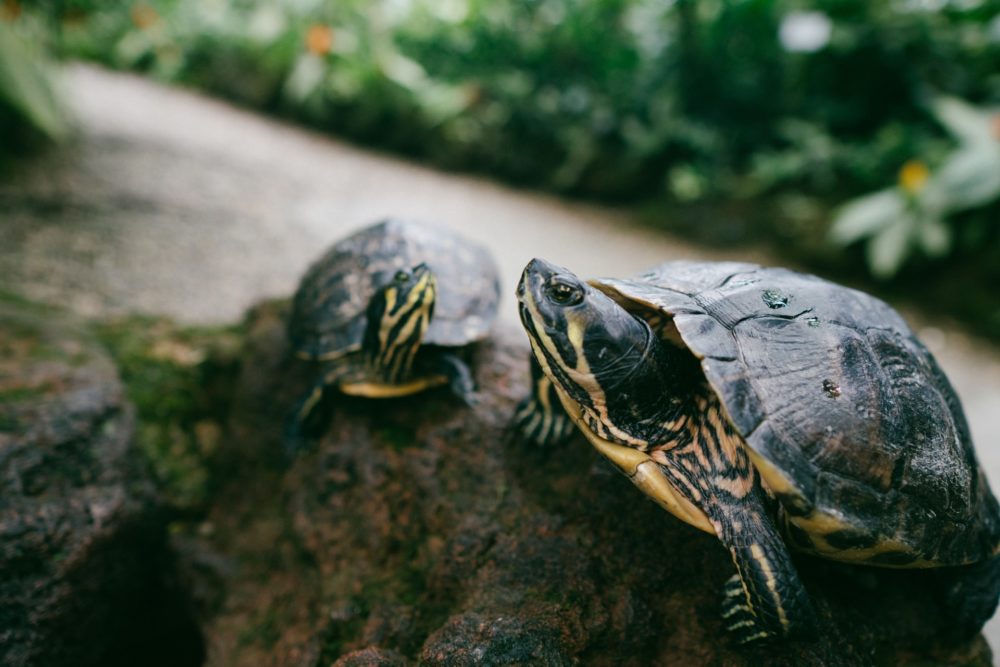 There are many foods that can harm a turtle and should be avoided at all costs.

Here are some foods that turtles cannot eat:

Turtles very rarely eat raw meat, even when in the wild. Their source of protein is usually insects and worms. Some meats contain salmonella which can cause gout and other health issues for turtles.

Meat such as chicken or beef should be thoroughly cooked before feeding it to a turtle.

Goldfish contain a lot of fat which can be harmful to turtles. As well as this, goldfish also contain thiaminase, which can cause neurological problems.

Many exotic fish have this same problem and offer very little nutritional value so should be avoided. Depending on their species, some crustaceans such as crabs or lobsters can seriously harm or even kill a turtle. It’s better to simply avoid all of these foods.

Nuts contain very high doses of oxalic acid, although these differ from nut to nut. Nevertheless, every type of nut contains too high a dose to be fed to a turtle.

Nuts also contain large levels of protein per gram which can cause problems.

Vegetables such as spinach, chard, and beets should not be fed to a turtle. These also contain oxalic acid which can block calcium synthesis within a turtle and cause serious harm.

Some other foods with dangerous levels of oxalic acid for turtles are:

Some foods can be given to turtles but it is recommended you stay away from them.

These include iceberg lettuce and celery. Although not harmful, they don’t provide any nutritional value so will not help a turtle’s health whatsoever.

This depends on the species of the turtle. Some turtles can eat different types of dog or cat food but not if the bites are too big for the turtle’s jaw.

Some turtles should not be fed other pet food because the protein content is far too high for turtles to cope with and can cause long-term harm.

Bread isn’t especially good for turtles. Their bodies lack the enzymes to break down bread and similar foods. They are capable of eating bread but it should be avoided as it has no proven benefits.

Who knew turtles had such a varied diet? Just like humans, turtles need a balanced diet to keep them fit and healthy.

A mixture of meats, vegetables, fruits, and plants should ensure their diet is rich enough of all the proteins, vitamins, and nutrients they need. As we have seen though, there are so many different aspects that can impact a turtle’s diet.

If you are planning on getting a turtle, make sure you know what species it is so you can feed it the right food.

Remember, a turtle’s life isn’t action-packed every day so a good, tasty meal may be the difference between a good day and a bad day for our reptile friends.