It may come as a surprise to learn that turtles don’t actually have any vocal cords. You may have witnessed a turtle making a strange sound, or even videos online of turtles making hilarious noises.

This is because, despite their lack of vocal cords, turtles are still able to produce a huge range of noises. While we can hear some of the little noises that turtles make, most of their sounds are inaudible to the human ear. Each of these inaudible sounds has its own unique purpose. 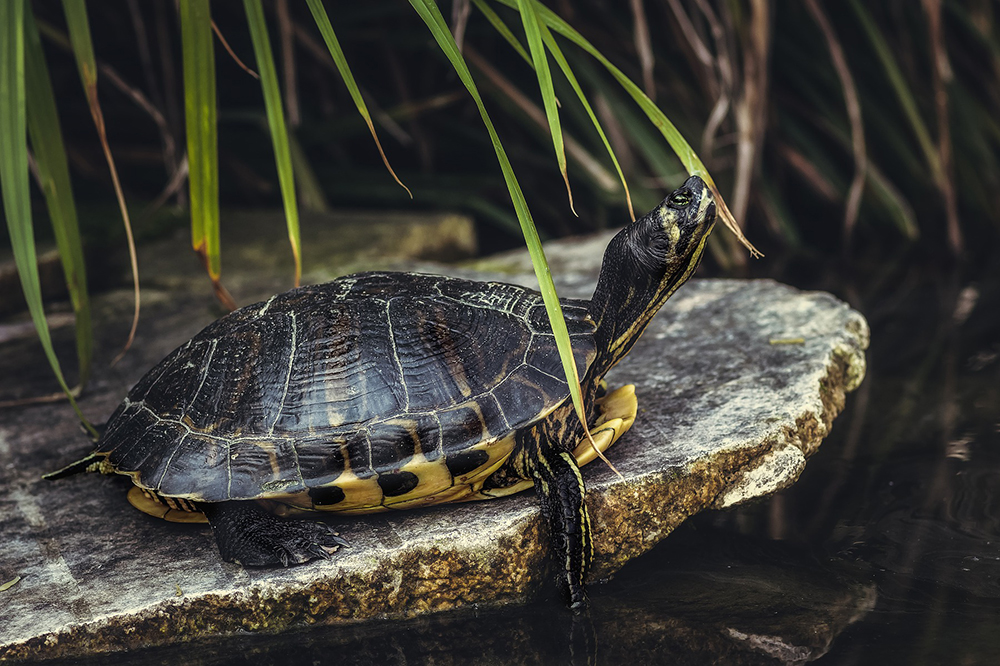 Like most other animals, turtles use sounds as a means of communication with each other. They use such sounds to express different feelings such as contentment, a desire to mate, and fear.

Some turtles are far more vocal than others, and this is probably nothing to worry about if your turtle’s needs are consistently met. Some turtles can hiss, whine, and sometimes even cluck. These sounds are created when the turtle expels the air from its lungs, eliminating the need for vocal cords.

What Turtle Sounds Are Normal?

Hissing is probably the noise that turtles make more than any other. Some people associate this sound with anger, hostility, and bad temperament. However, your turtle is not trying to hurt you when they hiss.

Hissing is simply how they express fear, and it is completely involuntary. If you’re approaching a turtle and it begins to hiss, it is unlikely that it is going to attack you.

It has simply identified a threat, you, and it is scared. This action is not something they can control; it just happens, similar to the way a person might cry out in the middle of a daunting situation.

Turtles hiss when they retract their head into their shells quickly. This swift movement causes air to be expelled from the turtle’s lungs, creating a familiar hissing sound.

As turtles use sounds to communicate, you may notice different sounds when your pet is mating, in conflict, or scared.

I found a great video showing all the different noises and sounds turtles make:

If your turtle is feeling hostile, it will use sounds to intimidate its threat prior to attacking. Snapping turtles are particularly notorious for making confrontational noises and movements.

An aggressive turtle sound will be a combination of heavy panting and some hissing. This isn’t just limited to snapping turtles, however, all turtles are capable of making these sounds, providing they are territorial.

If you’re looking to keep more than one turtle in a tank or enclosure, you’ll need to ensure that each turtle has its own space and safe hiding spots. This will help them to feel secure in their habitat and that they have their own territory without having to compete with the other turtles in the tank.

Unlike other household pets such as cats, dogs, and some other reptiles, turtles would rather not be handled, touched, or picked up. However, you can train a turtle to become familiar with a regimented “handling time”.

To create a positive association with being held, handle your turtle for only a small period of time and at the same time every day.

Scheduling handling time around mealtimes will create that positive association which will in time reduce the stress, anxiety, and fear that your turtle feels about being held.

You can slowly increase the amount of time you touch them for. This will help to build trust between you and your turtle. If your turtle is particularly hostile and continuously hisses when handled, it is probably time to stop attempting to hold them.

Other indications that your pet turtle doesn’t really appreciate being approached include running away every time you’re close to him, his constant dodging of your touch, and an overall tenseness to his body.

You’ve probably come across videos on the internet of giant tortoises making rather amusing sounds as they mate. The sounds are very distinct, high-pitched, and funny to listen to. It somewhat resembles a continuous wail.

Turtle mating sounds are very similar to that of tortoises. Certain breeds of turtles create different sounds. For example, Map turtles can emit low-frequency sounds when they mate. This sound that they create is so low-pitched that it is not audible to humans.

Do Turtles Talk to Each Other?

Experts have been studying turtle communication for many years, attempting to find links between certain sounds and behaviors. It has been found that Australian snake-necked turtles make sounds during the mating season.

This sound is a quiet vocalization that is expelled in rhythmic bursts. It is thought that these sounds could be displayed in order to compete for a mate, but this has not been proven.

It has been found that infant South American river turtles make small peeping noises a few hours before they hatch. This peeping sound is commonly witnessed among crocodile and lizard hatchlings.

Although no specific purpose has been identified, researchers believe that they are using these sounds to alert the other hatchlings of their intentions to break out of their eggs.

This ensures that the hatching of all of the eggs occurs in sync, making each hatchling less vulnerable to predators. Once hatched, these turtles will continue to make noises as they make their journey toward to water.

It has been observed that female South American river turtles seem to respond to their young by leading them downstream. It is uncertain whether or not they use sound that is inaudible to humans to do this. However, researchers believe that they could be using some form of low-frequency echolocation.

Also read: Do Turtles Have Ears?

Ordinary land turtles will spend much of their time basking on land and enjoying the heat, with occasional detours into the water. However, sea turtles spend their entire life under the water. Sea turtles only approach land to lay their eggs.

Much like land turtles, sea turtles can produce some low-pitched sounds that aren’t audible to humans. Low-frequency sounds work great underwater as they are able to travel further.

This is the same concept that is used by large ocean mammals such as dolphins and whales.

Researchers have recently discovered that female sea turtles, particularly leatherback turtles, use vocalization to communicate with their hatchlings. 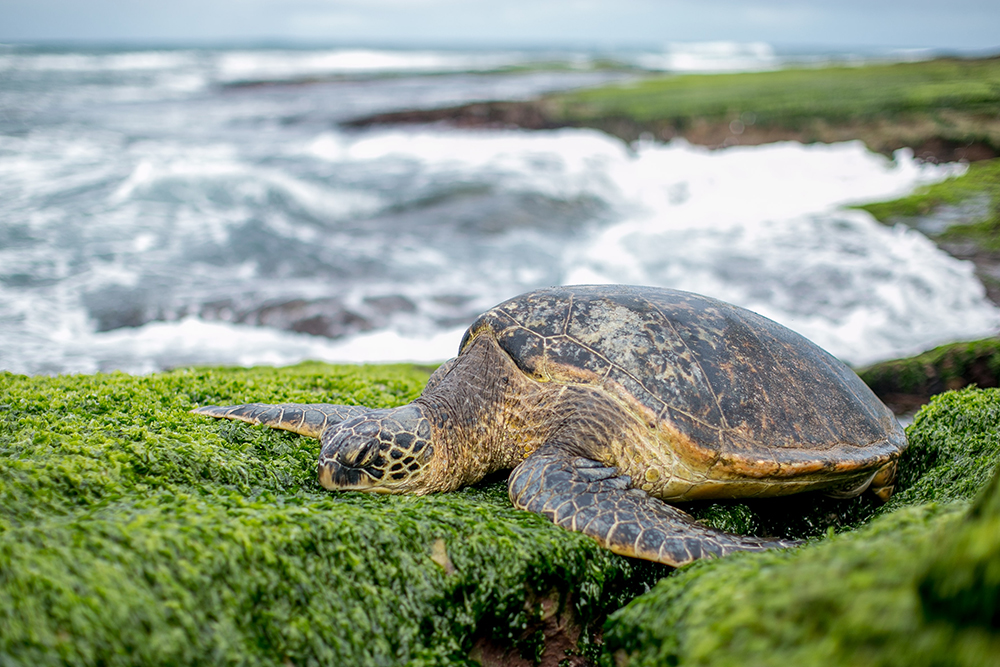 This discovery quashed the prior common belief that turtles are completely deaf and cannot communicate with each other using sounds.

Many sea turtle babies have been found to make noises before, during, and after hatching. These breeds include:

It is common to hear Arrau turtle embryos making sounds roughly 36 to 8 hours before hatching.

Leatherback turtles will begin to make noises at around 51 days of incubation.

Can Turtles Use Sound to Communicate with Humans?

Of course, turtles aren’t quite as communicative and vocal as other pets. If a cat wants food, it will cry. If a dog wants a walk, it will whimper and beg. However, it is a little more difficult to identify what your turtle is trying to tell you.

Regardless of how subtle the communication may be, pet turtles do still use sounds to communicate with humans.

As previously stated, you may experience some hissing when you approach your turtle. This is not hostile behavior, just the turtle simply warning the human to back off as it is nervous and afraid, not aggressive.

If you decide to pick up your pet turtle, don’t be surprised if you encounter some angry little hisses. As turtles become more and more familiar with their surroundings, environment, and you, they will begin to hiss less.

Over time, your turtle may even begin to approach you voluntarily as it sees you as a provider of nutrition. Some pet turtle owners have reported that theirs will knock on the glass of its tank when you enter the room. This is used as a signal to get your attention when they are hungry.

How Do Sea Turtles Hear?

At present, we do not have any reliable underwater recordings of sounds produced by turtles, nor do we know how well most sea turtle species hear sound either in the air or underwater.

The closest we have gotten to obtaining any sort of “proof” of sea turtles making noises is through using auditory brainstem responses (ABRs).

Scientists and researchers have used ABRs to identify that sea turtles can in fact hear low to mid-frequency sounds. However, their sense of hearing is not as advanced as most other mammals. A sea turtle can communicate through sound, but its sensitivity to sound is very limited.

The opening into a sea turtle’s ear is covered by thick skin, known as the cutaneous plate, which is a ring of scales that are similar but smaller than those on the rest of the head. Below this skin is a fatty layer.

The thick skin and a fatty layer combined make it difficult for the turtle to hear well in the air. However, this skin provides good tissue conduction for underwater sound to the middle ear and inner ear.

Although turtles aren’t exactly the chattiest pets on the planet, they are able to communicate, both with each other and with humans. They can do this either verbally, or non-verbally. Vocal communication is often an indicator of stress and fear.

It is very common for freshwater turtles to hiss when they feel scared or threatened. If you ever encounter a hissing turtle, it is a good idea to back off, and stay away. Turtles find human interaction stressful and would appreciate privacy much more.

Although it is more uncommon, turtles may also hiss when they are hostile. They can also create low-frequency sounds, similar to those that whales use, which can travel far underwater.

The most recognized natural form of vocal communication that turtles use is the low-pitch noises they use to synchronize the hatching process. This is why you’ve probably seen pictures or videos of baby turtles in their hundreds fleeing to the shore.