Just like the majority of wild animals, turtles can be likely to bite if they’re feeling threatened.

This is a more likely response if you come across a turtle when you’re actually out in the wild, but don’t go leaving your fingers unattended around turtles in captivity either as they can still start snapping!

It also depends on your turtle’s species. Some will be more aggressive by nature than others will be, such as snapping turtles, for example, who can deliver a bite with such strength behind it that these turtles can even amputate your fingers.

Your best bet for avoiding a finger-crunching confrontation is to keep a safe distance from any turtles you encounter in the wild and to always be cautious, even around captive turtles.

Seeing any type of wildlife in its natural habitat can be exciting, but try not to overwhelm the animal(s) which could cause feelings of agitation or fear and result in a turtle bite. If you want to learn more about the causes and treatment of turtle bites, this article is here to cover it all. 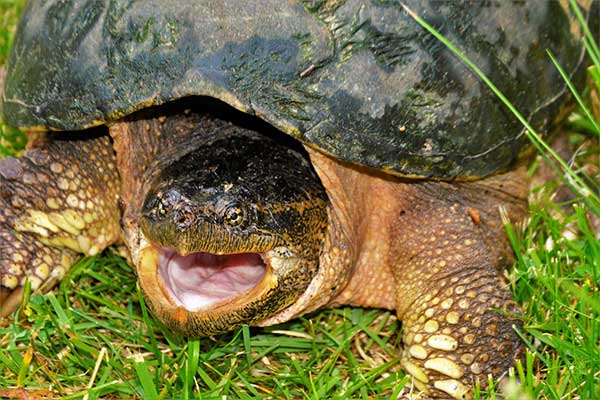 Contents show
1 How Bad Can a Turtle Bite Really Be?
2 Turtles that Bite More Often than Others
2.1 Snapping Turtles
2.2 Softshell Turtles
3 Transporting an Aggressive Turtle
4 How to Teach Your Turtle to Not Bite
5 How to Treat a Turtle Bite
6 Self-Biting Turtles
7 Shedding their skin
7.1 Experiencing skin irritation
7.2 Related Posts:

How Bad Can a Turtle Bite Really Be?

They might be small and slow, but turtles and tortoises alike are highly protected by their hard, outer shell which covers all of their essential organs.

In addition to this excellent defense mechanism, turtles will just as happily take a bite of anything that gets too close up in their personal space without building up a certain level of trust first.

Tortoises do tend to be more dopey than dangerous, and these herbivores are more likely to accidentally try a nibble of what they thought was a bug or worm rather than attack your foot or fingers out of aggression, not that it necessarily hurts any less just because of this.

This is why turtles who are kept as pets are less likely to do serious harm through biting as they (hopefully) won’t feel as threatened by you or your presence due to the fact that you’ll have already been able to build a rapport with your turtle through feeding and socialization.

The extent of the damage caused by the bite also depends on the size and species of the turtle. Breeds such as snapping turtles or softshell turtles are particularly well-known for their vicious bites.

On the other hand, while smaller turtles like sliders (Trachemys Scripta), map turtles (Graptemys), and cooters (Pseudemys) may be able to draw blood, you’ll be more likely to end up dealing with a shallow cut than losing a limb.

Turtles that Bite More Often than Others

With a name like ‘snapping turtles,’ it’s not hard to see why this species of turtle has become so renowned for its cantankerous disposition.

The common snapping turtle (Chelydra Serpentina) and the alligator snapping turtle (Macrochelys Temminckii) are probably the two turtle species you’ll come across most often on your travels, which are similar in size but separated by their genera.

You can tell them apart by the look of their carapace. Common snapping turtles will typically look quite rough and ready with a shell that has a tan to brown pigmentation and extremely long tails which can be just as long as the length of the shell.

Alligator snapping turtles have a spikier carapace by comparison that’s similar to the skin of a… you guessed it, an alligator.

Also read: Can Snapping Turtles Bite Your Finger Off?

The second of the two most combative species of turtles is the softshell turtle which is just as easy to single out by its shell as the snapping turtle. A rugged, leathery shell is universal across this species, but its location will play a part in length and size.

You’ll need to watch out for their long necks as this allows softshell turtles better access to turn around and bite you, especially around larger softshells as these have a more dangerous and painful bite to them.

In some instances it may be necessary to move a pet turtle for its own safety, but how can one do so without losing a finger for your trouble?

Approaching the turtle from behind is a good place to start as you’ll be less likely to startle or scare them or there are a few ways to go about picking them up so you’re able to move them.

Your first option is to lay a towel or blanket down next to the turtle, and once they’re standing on the material you can lift the corners and pull them together to carry them to safety without any danger to yourself.

A shovel is a similar alternative where you can use it to carry the turtle at a distance where they can’t reach your fingers for a bite.

Picking the turtle up by their back legs is possible but a more risky way of moving a turtle in distress and you should never pick them up by the tail or drag them to a safer spot. Doing either of these things can cause serious bruising or other injuries.

How to Teach Your Turtle to Not Bite

Okay, so there’s no one set rule for the entire species, as every single turtle is unique in its reactions to certain situations.

We’ve already mentioned that specific species will be more prone to a biting response than others and that it can vary depending on whether they’re wild or in captivity, with the latter being the safer choice.

However, there are certain things you can do which can teach your turtle not to bite. Don’t think of training them like you would a dog or a horse as turtles won’t be responsive to this, but instead, try to work on the relationship between you and your pet by showing them plenty of care and patience.

Take things slowly and don’t make sudden movements around them.

The younger your turtle is, the more aggressive and uncertain it will be around you, but as they grow used to and with you they should become more trusting and comfortable with having your presence around, therefore they will be less likely to bite you.

How to Treat a Turtle Bite

To avoid the injury caused by a turtle bite going from bad to worse, it’s important to treat your wound as soon as possible after the injury occurs. The type of treatment that is required depends on how serious the bite was and how much damage has been done.

Before you can even get to this point – you might need to actually remove the turtle from the limb they’ve bitten. If they’re holding on, which they have been known to do, you’ll need to get the turtle to let go.

Simply pulling them off can do more damage than good, so the best method of removal is by submerging the turtle underwater so they can swim away.

Once you’re turtle-free, you’ll need to make sure the same goes for germs and bacteria by cleaning the cut and the surrounding area. Some turtles carry salmonella, so a course of antibiotics may be required to treat this if the bite has drawn blood.

For more serious injuries where the cut runs deep or if you’re losing a lot of blood, you’ll need to seek medical attention as soon as possible.

We’ll keep repeating it until the danger really sinks in, but some snapping turtles have a bite so powerful it can take your finger clean off or require some stitches at least, so you’ll obviously need to seek medical attention.

It is a trait most often associated with pet dogs or cats, but some turtles will end up nibbling a little on their own limbs instead of (or in more unfortunate cases, in addition to) trying to take a bite out of your fingers.

There are a few reasons that your turtle could be behaving like this, which include the following factors:

Turtles go through a skin-shedding process that is completely natural, so if they’re biting their skin all of a sudden it could be an attempt to loosen the dead skin so it slips off more easily.

Provided that they’re not causing themself any injury there’s nothing to worry about in this case and you shouldn’t need to do anything.

This isn’t uncommon for pet turtles, but it’s important to pinpoint the source of what’s irritating their skin so you can deal with it appropriately to reduce how much your turtle is biting itself.

It’s most likely going to be due to the conditions of the turtle’s water as this needs to be clean and properly filtered at all times with the correct water chemical levels.

If in doubt, take your turtle out of its enclosure and give it a good clean to see if this makes a difference to how often your turtle bites its own limbs.