Painted turtles are named so because of their unique and ornate shell markings, but they also have other names.

Regardless of their names, they are very unique and very special, and similarly, they require unique care.

Their water quality needs to be closely monitored, their enclosure temperatures, and what food they are fed. They need special optimal care to sustain long and healthy life, especially in captivity.

If you are the owner or are seeking to be an owner of a Painted Turtle then you need to be aware of their dietary requirements. Find out what do painted turtles eat in this article. 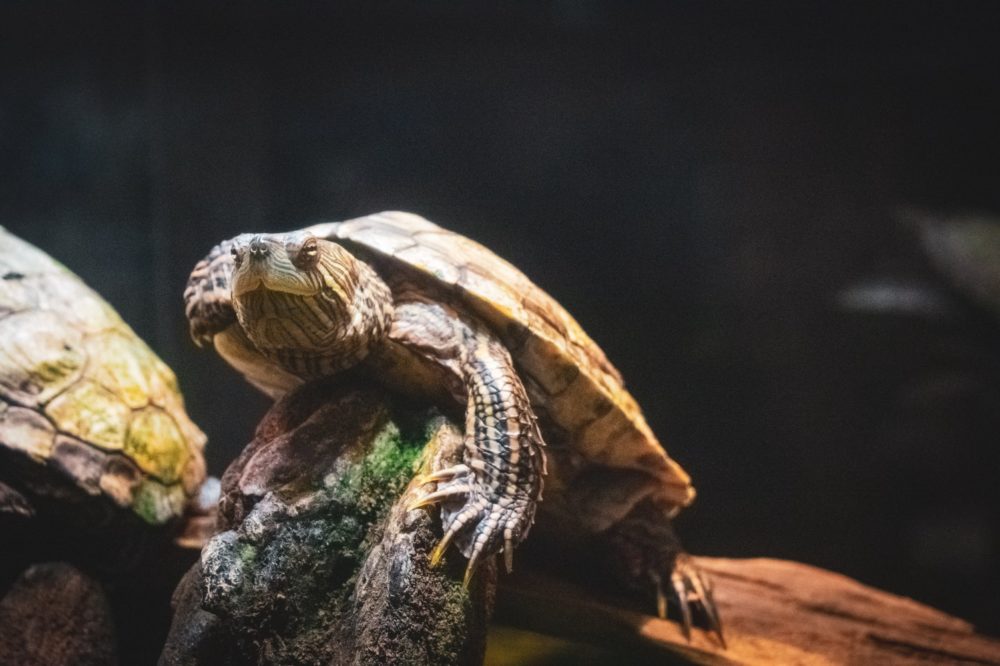 Before you jump in to learn all about their diet, we will give you a little bit of time to learn more about the animal itself, as this can help you understand your turtle and its habits.

The average painted turtle will grow to be anywhere between 4 and 12 inches long. Males are smaller than females, as is very common in a lot of animal species.

In the wild, these turtles can live to be over 50 years of age and are usually found around ponds or in small lakes. You might often spot them on logs basking in the sun to dry off. They also hibernate in the winter, like many other animals, as they do not like the cold conditions.

Like other aquatic turtles, these are not ideal for being around small children or people who have compromised immune systems, this is due to reptiles often harboring Salmonella and it is good practice for any handler of an aquatic turtle to wash their hands before and after.

When painted turtles eat they often do so while swimming, so it is advisable that if you own a turtle you feed them foods that can either float or be clipped to the side of the enclosure.

Aquatic turtle pellets are a great and staple diet, however, turtles should get fresh and leafy greens in their diet, as well as enough dark greens such as romaine lettuce, dandelion greens, and fresh parsley.

These should be offered regularly but not all the time as part of their continuous diet. Let’s talk some more about feeding your turtle in captivity.

Painted turtle diets vary when they are in the wild and captivity. In the wild, they rely on insects and plants generically. While their captive diet differs.

In an aquarium, painted turtles are omnivores, they prefer meat to vegetation. However, you should not adhere to an aggressively protein-based diet for your turtle. Limit their protein intake and provide them with a well-rounded diet based on plants and vegetables with proteins/ meats around 2 or 3 times a week.

Staple vegetables or plants for these turtles can count as things such as kale, duckweed, anacharis, waterlilies, and so on. Protein wise you can get things such as omega one or mazuri as pellets, omega one uses salmon and herring, making it rich in seafood and good for health overall, mazuri is what you will find many zoos or aquariums use to feed their turtles.

They can also have treats, turtles will enjoy things such as crickets or meal-worms in this case, all easy enough things to buy and that are widely available for reptile feeding.

Painted Turtle Diet in the Wild

Wild painted turtles hunt by flushing out their prey from underwater vegetation in lakes, rivers, or ponds. They often feed on dead fish, capture weak, old, or injured fish and often hunt for aquatic insects.

From time to time they are also known to feed on vegetation, primarily aquatic vegetation such as lily seeds, duckweed, and algae. Different subspecies of this turtle will have different feeding habits as is common with any animals.

Some subspecies of the painted turtle will prefer aquatic vegetations where as others may eat more insects or carrion.

How Much Should You Feed Them?

You should give your painted turtle about a handful of vegetables or plants per day, then to cover protein you should give a spoonful of turtle pellets 2-3 times per week.

You can also treat them to cricket or other treats once a week or every other week. Doing this gives them a perfect variation in their diet that provides all their necessary nutrition.

You want to stay away from feeding your pained turtle a source of protein every day, and you don’t want to overfeed it either. There are health issues that can arise from this of course there is the obvious problem of obesity, but there are also more serious problems such as kidney issues.

Similar to any other pet, you don’t want to go overboard with treats, treats are much like our own, it’s not healthy to eat a candy bar every single day, or for your dog or cat to have any more treats than the pack suggests.

With turtle it is similar and you should not go too far, you can give them around 3, or maybe 4 crickets or mealworms every week, or you could give them a larger amount every two weeks. We think that turtles probably prefer having them spread out, a few a week, that’s what we would prefer.

What About Baby Painted Turtles?

Baby painted turtles are very similar to adults, you do not need to drastically change their diets. Unlike mammals, reptiles do not have a diet from their mother from a young age, they eat almost just as their parents do. All you need to do is differ the ratios of their portions.

As a baby painted turtle is still growing you should give them turtle pellets every day for around 5-6 day a week at least. The amount is the same as for their parents, as many as the size of its head.

The difference between baby and adult painted turtles is in the plants. Vegetables and plants, much like humans, these babies are not a fan.

It’s much like when you put vegetables on a child’s plate and they go ‘Eww!’. Baby turtles feel the same way, they will be unlikely to eat this food, this is normal.

Instead of trying to get them to eat it, try them on a different type now and again, once or twice a week would be good, and then as it grows older it should start to eat these. Do not worry if you have a baby painted turtle under 6 months old and it turns its nose up at kale, it will get there.

As your turtle gets a bit older you can start placing the pellet feeding days with veggie days, this will need to be progressive, you slowly do this until you only feed the turtle their pellets two to three times a week. You are weening them off of protein pellets.

Can They Eat Fruit?

In theory yes, your turtle could eat fruit, it is not harmful to turtles. But, turtles have little to gain from fruit. So it is not recommended.

Fruit is not a part of any turtles diet in the wild, while yes, pellets are not they are made from nutrients that a turtle would find in the wild and that they require. Fruit is neither of these things.

Fruit is not ideal for a turtle and they may not even like it. It can also be messy to put in a tank, they may dissolve and break up and make such a mess of the water, leading you to do un unscheduled clean.

It is best for less messy foods and ones that float, stick to leafy greens and pellets for their diet, with the odd treat of a mealworm or two thrown in. They will love it.