Gopher Tortoises have lived in the American wilderness for so long that we might as well name these little fellas the original lone rangers.

With shells that can reach up to 12 inches high, and an average length of 13 inches long they’re not hard to miss. They weigh between 10-12 pounds. 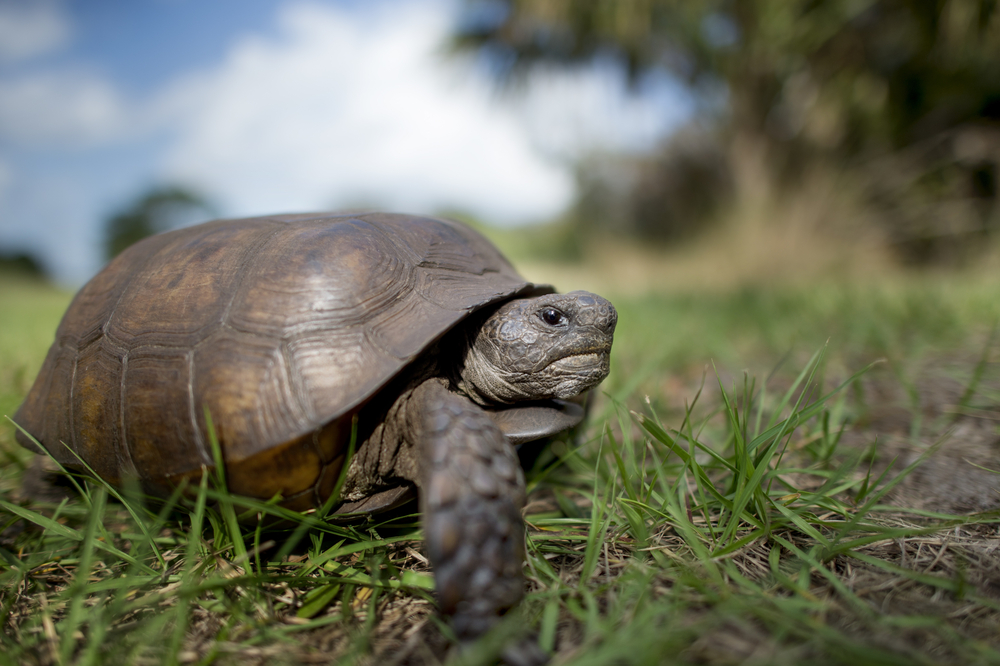 Gopher Tortoises spend a lot of their time digging. It is unsurprising then that they have flat, wide claws made perfectly for burrowing. They also have armored front legs to protect them whilst they do this.

Male Gopher Tortoises have concave shells that range from grey-black to dark brown in color, with a plastron (yellow bottom). Females have the same colorings with a flatter shell.

An average wild Gopher Tortoise’s life span ranges from 40 to 60 years. They have been noted to live for over 100 years in captivity. This is due to access to health care and the removal of predators.

Gopher Tortoises are part of the Gopherus family. This family is made up of the only Tortoise species native to North America.

The earliest evidence puts the Gopher on the North American continent for over 60 million years.

The Gophers make their homes predominantly in the Southeastern United States. They are the State Tortoise of Florida and the State Reptile of Georgia.

It is in these areas where they build their world-famous burrows.

Whilst digging is not a unique thing in the Tortoise world, the effect a Gopher Tortoise’s burrow has on its environment is something really special.

Gopher Tortoises are solitary and live alone. This excludes breeding and hibernation seasons.

Gopher Tortoises have a home area of around 4.5 acres. Within this range, they dig several burrows. Some of the largest recorded Gopher Tortoise burrows have been 48 feet long, and delve 10 feet into the ground.

Their burrows are a source of safety and protect them from many things, including fire, cold, heat, and predators.

The most unique feature of their burrows is how the surrounding wildlife (Also check out Best Wildlife Posters And Prints) has adapted to their homes. Scientists have noted at least 360 other species that live and rely on the Gopher Tortoise’s burrows for their safety and day-to-day living.

No one can accuse Gopher tortoises of being fussy eaters. Their natural diet includes over 300 different species of plants. Even more in captivity.

They are herbivores. The majority of their diet involves eating a large range of grass (their favorites are regular grass, wiregrass, and broad-leaved grass) and legumes.

They have also been recorded eating blackberries, gopher apples, mushrooms, and many other types of fruits and spores. They are also partial to many types of flowers.

Threats to the Gopher Way of Life

Gopher Tortoise’s conservation status is currently Vulnerable. The main threats to their way of life are the following four things:

Humans affect the Gopher Tortoise population in two major ways: hunting them and removing them from the wild to keep as pets.

Hunting has continued for decades and still continues now despite being illegal in many states.

Removing Tortoises from the wild to keep as pets or to race can significantly damage the breeding population. If you are looking to adopt a Gopher Tortoise there are professional breeders who acquire their reptiles from a reputable sources.

The main concern for Gopher Tortoises when it comes to climate change is that the plants they eat will die out.

The good news is that many scientists have reported Gopher Tortoises changing their diet as the food available to them changes.

Gopher Tortoises are particularly vulnerable to a respiratory disease called URTD. It is a slow-acting disease that decreases their lifespan by around 10 years.

There is an antibiotic that is used to treat wild Tortoises found with the disease.

Like many species around the world, human population growth has resulted in a loss of habitat for the Gopher Tortoise.

The most suitable habitat for Gopher Tortoises is  Longleaf Pine forests. Since European settlement in North America, these types of forests have decreased by 96%.

There are four larger areas of protected forest in the southeast that offer a protected sanctuary for the Gopher Tortoises and the 360 other creatures that live in their burrows.

Gopher Tortoise mating season runs from April through to November.

Female Gopher Tortoises only lay one set of eggs a year. This brood can be anywhere between 6-12 eggs, with numbers of up to 25 eggs being previously recorded. The temperature of the nest will determine the offspring’s sex.

When they hatch the Tortoises are only around 1.5 inches long. From this point, they grow around an inch every ear, with their shell slowly getting harder.