Box turtles are one of the most common pet turtles. They are docile, pleasant, and friendly creatures that enjoy the company of humans. But, of course, a human’s home is not the natural habitat of a box turtle.

The vast majority of turtles enjoy the water. The same is true for box turtles.

But, can they swim? The answer is yes, box turtles can swim!

That doesn’t mean they can jump into a lake and start doing laps. 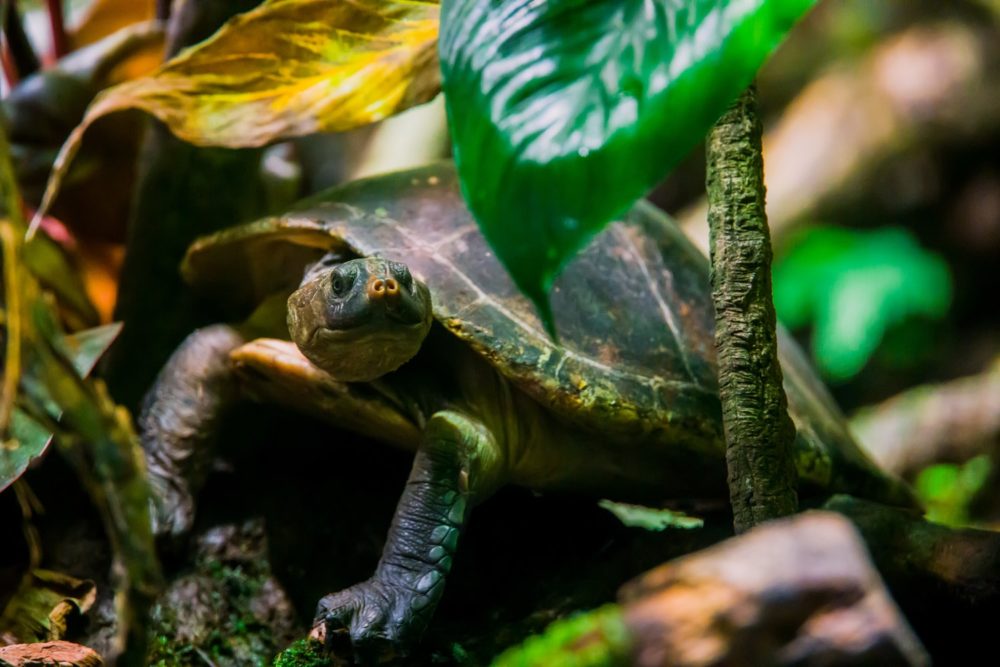 So, here are a few important facts that you need to know before letting your box turtle swim.

How Well Can Box Turtles Swim?

Although box turtles can technically swim, they’re not very good at it. Unlike their relatives the sea turtle or freshwater turtle, box turtles do not have limbs built for swimming.

Sea turtles have flippers and primarily live in the sea. Many freshwater turtles have webbed feet and live in and around water. But, box turtles have columnar legs and feet. These are also called elephantine legs and feet as they resemble the legs of an elephant.

Box turtles have short, stumpy feet that aren’t ideal for swimming. But, they still enjoy it.

How Deep Can Box Turtles Swim?

This is a very important fact to know. Although box turtles will generally stay close to the surface when they’re swimming, they still shouldn’t swim in deep water. They should also not swim in rough or choppy waters.

Box turtles aren’t strong swimmers so won’t be able to swim well or stay safe in any water that isn’t calm. A small pool or lake of water will be best. If you have space, investing in a children’s paddling pool would be a great way of introducing some water and swimming to your box turtle.

Alternatively, they can try out their swimming skills in the bathtub or even the kitchen sink. These are probably the best and safest environments. This way, you can see just how well your box turtle can swim.

How Long Can Box Turtles Swim?

But this depends on the turtle. If you have your own box turtle and are wondering if you can let them swim, allow them to try it out for a few minutes in the tub and see.

What Kind of Water Can Box Turtles Swim In?

All turtles, except sea turtles, will only spend time in freshwater. Saltwater is not the natural habitat of any turtle that doesn’t naturally live in the sea.

So, if you have a box turtle, it’s not a good idea to let them in saltwater.

Saltwater isn’t good for box turtles. They may even become ill if forced to swim in saltwater. So it’s definitely to be avoided.

Do Box Turtles Need to Live Near Water?

Not necessarily. In the wild, box turtles will likely come across water and won’t be bothered by it.

They may need to cross a brook or a stream and do this relatively easily. But they don’t live in water or wetlands. Box turtles prefer a dry environment.

Not really. Box turtles will swim in the water. But most of the time, they will keep their head and probably the top of their shell above the water. They won’t put their head under the water.

This is in direct contrast to other turtles, such as sea turtles or some freshwater turtles. These turtles will go completely underwater and happily swim around. Box turtles won’t do this.

Yes, they absolutely can. This is why box turtles shouldn’t be in deep water. They should only be in water that is a few inches deep.

And, if you can, you should keep an eye on them while they’re in the water. Especially if you have put them in a paddling pool or the bathtub.

Should I Keep My Box Turtle in Water?

Absolutely not. Box turtles do not need to live in water. They should not be in an aquarium filled with water. They can have a small pool of a few inches of water in their enclosure. But nothing more than this. Anything deeper can risk your turtle drowning.

Another way that box turtles are susceptible to drowning is because they get tired easily while swimming. As we have mentioned, box turtles aren’t the best swimmers. So, when they do swim, they will tire out relatively quickly as it will take them a lot of effort.

Unless you live in a very wet and swampy area, you probably only have access to tap water. This will be fine for your box turtle. They don’t require any specific kind of freshwater. (Just remember that they should steer clear of saltwater!)

Eastern Box Turtles are widespread in the western and central parts of the United States. In terms of swimming, they’re quite similar to other box turtle species.

Eastern box turtles can swim, but not for too long. They are primarily terrestrial, and while they can and even like to swim, you shouldn’t let them do so in deep waters.

So, the most important thing to remember is that, yes, box turtles can swim. Just not very well. But this doesn’t mean that box turtles should avoid water. They can enjoy paddling or swimming a little in freshwater. Especially if the weather is hot.

If you have a box turtle, they will be absolutely fine in a few inches of water, maybe sometimes more. But, if they are in water that is any deeper than 3 inches, it’s a good idea to keep an eye on them.

There is no harm in allowing your box turtle to have a little fun in a small pool of water. Just so long as it isn’t too deep and they don’t spend too much time in there.