The American Snapping Turtle – known scientifically as Chelydridae – is found in North America; the species originally hails from Canada, however, today the reptiles can be found in various locations in the United States: mostly in the southern waters of Florida stretching to Mexico and all the way to Canada.

These turtles are characterized by their massive heads, strong jaws (hence their name), keeled brown carae, and long tails. 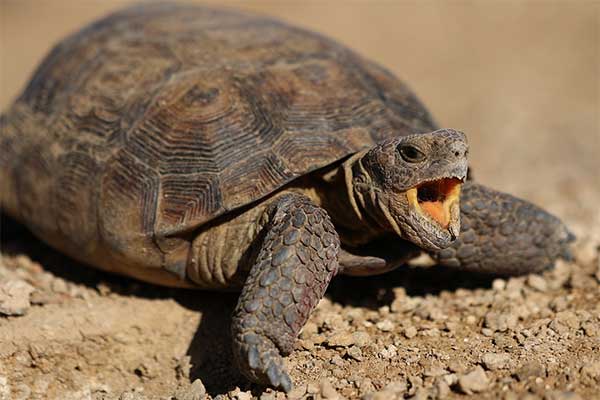 The American Snapping Turtle is usually found in the freshwater of North America, ranging from those of South Alberta to Nova Scotia all the way down to the Gulf of Mexico.

They usually bury themselves in warm shallow water and can be found buried in the mud, exposing only their eyes and nostrils as they scour the area for prey.

American Snapping Turtles can remain underwater for up to 3 hours at a time, and the species is used to living in waters with a lot of sand. While they are mainly found in the water, the nesting females usually venture onto open land when laying their eggs.

American Snapping Turtles can grow up to 19 inches in length, with males generally growing to be larger than females.

Reptiles are known for their longer life spans, which tend to be linked to their tough skin.

Some experts believe snapping turtles can live for more than 150 years, however, when kept as pets, they can generally be expected to live between 20 and 50 years.

American Snapping Turtles mate once a year, usually in the spring.

The female turtle will then lay between 10 to 50 eggs, and these will take approximately 3 to 4 months to hatch.

Despite their scary appearance, the American Snapping Turtle has several predators.

Although they have rough skin and a hard shell, they are still fed on by large predators such as alligators, foxes, bears, skunks, and even raccoons.

These predators have big jaws that can wrap around the turtle.

The American Snapping Turtle is considered endangered, particularly in the Ontario Province where it is legal to hunt a maximum of 2 turtles per person per day.

The species is also at risk due to habitat loss and road mortality, as well as poor care by humans when they are kept as pets.

Keeping the American Snapping Turtle as a pet

Despite its snapping tendencies and large size, the American Snapping Turtle can be kept as a pet so long as it is provided with the right conditions and diet to allow it to thrive.

Here are the key considerations for anyone looking to keep the American Snapping Turtle as a pet.

Like many turtle breeds, a UV fluorescent bulb is recommended in the area where you keep your American Snapping Turtle.

A 12-hour off and 12-hour on light period will help optimize the turtle’s health, stabilize their mood and fight off any diseases. Turtles that don’t get enough light will often end up stressed and could be riddled with health issues.

American Snapping turtles grow pretty big, so they are best kept in a small child’s pool. You can line the pool with gravel, and provide rocks or a turtle ramp as a basking platform.

The water should be kept around 75F to 86F during the day and can drop by 10 degrees at night. In order to keep the pool clean and free from contamination, you should also change at least half the water twice a week.

You’ll also want to install a full-spectrum reptile light to ensure your reptile has sufficient access to light.

On the other hand, you may wish to keep your American Snapping Turtle indoors instead. While little hatchlings can be kept in a 10-gallon tank, they grow extremely fast, and adult snapping turtles will need a 55-gallon tank before long. This is why many pet owners opt for a paddling pool instead.

If they are kept in a tank or specific enclosure, they should be provided with a basking lamp over the shallow area of the tank so that they can bask in the water during the day.

The American Snapping Turtle has quite a diverse and varied diet. They’re omnivores and are known to eat anything, including both meat and vegetables. The majority of their diet is made up of vegetables but they are also known for eating fish and snakes.

As pets, they can be fed a diet of moderate size minnows, crayfish, goldfish, or pond snails, as well as vegetation such as water hyacinth and elodea. Young American Snapping Turtles enjoy eating guppies, mealworms, and ghost shrimps.

Rather than feeding them store-bought food, they’ll enjoy fresh meat such as chicken, turkey, fish slabs, and beef heart. For vegetables, they can be fed romaine lettuce or mustard seed.

They can also enjoy an occasional sweet treat in the shape of fruits like strawberries, bananas, or apples. However, it’s important not to feed them these too often as too much fruit can be dangerous for them.

The American Snapping Turtle is an endangered species and if you intend to keep one as a pet it’s essential that you have the space, set-up, and resources available to adequately care for this fascinating species and allow it to thrive.